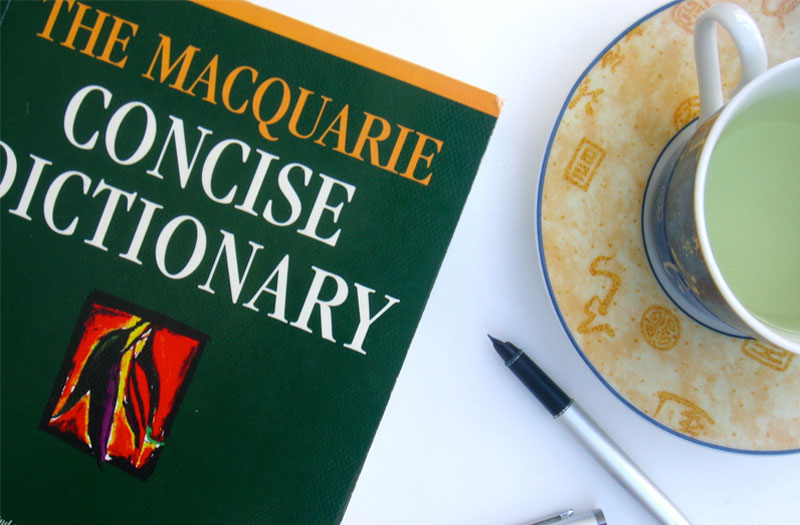 While devising new words and wrangling existing definitions into curious contortions can be considered all manner of fun, it is only cautiously that such linguistic innovations make their way into official dictionaries. Yet the value of these terms lies in their ability to reflect the practices and preoccupations of the societies that generate them.

This, at least, is the claim made by the people who bring you the Macquarie Dictionary. Since 2006, they have assembled an annual panel of experts to select the one word from the dictionary’s online update that most potently expresses the tone or focus of the preceding year. Past winners have included ‘infovore’ (2013), ‘burqini’ (2011), ‘googleganger’ (2010), ‘shovel-ready’ (2009) and ‘muffin top’ (2006). Of course.

Shortlisted words are sorted into categories including arts, communications, social interest, technology, politics, business, health and (everyone’s favourite) colloquial. The word of the year is determined by an esteemed assortment of academics, librarians, editors and authors. However, we more ordinary folk can also join in the fun by nominating our selection in the People’s Choice.

Voters are invited to select the word in each category that they think has made the most valuable or striking contribution to Australian English in the previous year. It’s a serious business – or at least it might be.

In truth, it’s hard not to just plump for the most absurd or appealing word on each list, and believe me, there are quite a few.

Words like ‘wikiwash’ (meaning to edit Wikipedia for the purposes of self-promotion) and ‘emoji’ (denoting ideographs used in electronic messages, from the Japanese e for picture and moji for character), from the communications category, indicate the direction of our online interaction. The slightly snarky ‘generation XL’ (referring to any generation characterised by high levels of obesity) in the social interest category also reflects a certain broadening trend.

One for writers and editors to watch out for is ‘atomic typo’, listed in the arts category. This is the result of those slips of fingers on keyboard that produce a real – though incorrect – word a spellchecker will blithely ignore. (Another reason why human proofreaders are so valuable.) The phrase derives from the idea that the mistake is usually very small, often with only one letter absent or transposed. Even so, I would argue that the potential impact of such errors echoes in the more sobering associations of the word ‘atomic’.

Meanwhile, the practice of concocting awkward nouns from other word forms lurches ever onward, as the phrase ‘to fly by the seat of one’s pants’ is transmogrified into the uneasy ‘pantser’. This term, also located in the arts category, describes a fiction writer who improvises without a definite outline, in contrast to a ‘plotter’ who writes to an established structure.

Other shortlisted words show a more sombre side of the past year. These include:

And in just case you dreamed that misogyny and homophobia miraculously disappeared from our lexicon last year, you’ll be discouraged to discover such terms as: ‘mansplain’ (colloquial), which occurs when a man delivers a patronising explanation to a woman with the assumption that she will be ignorant of the matter at hand; ‘dude bro’ (colloquial), referring to a man who demonstrates overt masculinity through dress, behaviour, and sexist and homophobic attitudes; and the contemptible ‘girlie man’ (politics) to denote an effeminate male. We can apparently thank Arnold Schwarzenegger for that one. Or not.

Although certainly diverting, filtering through these lists and picking your word of choice from each could deliver you a dose of ‘decision-fatigue’ (general interest). If affected, don’t get all ‘flappity’ (colloquial). Just take yourself down to your local ‘cat cafe’ (general interest) and seek solace in a nibble from a ‘share plate’ (eating and drinking) or a bracing cup of ‘cold-brewed coffee’ (eating and drinking).

I’m sure you’ll feel much better after that.

What nifty neologism, pointed phrase or twisted definition captured your attention this year? Which words from the Macquarie Dictionary’s 2014 lists most tickle your linguistic fancy?