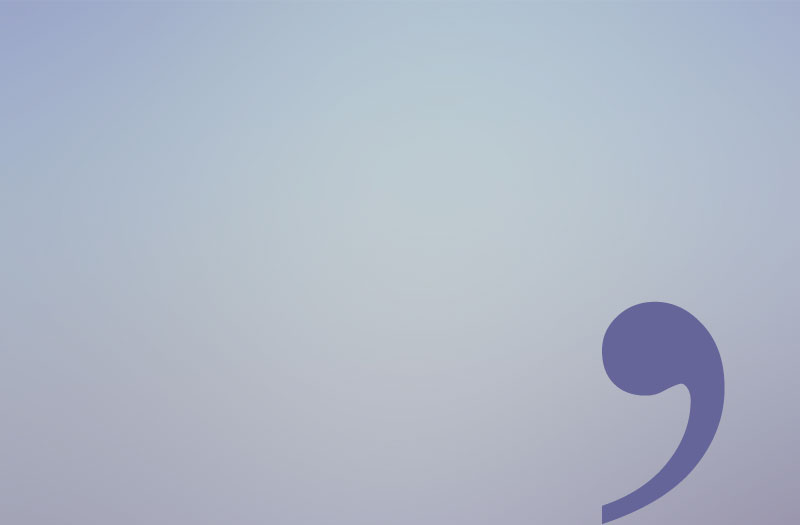 Despite their demure demeanour, commas can be perplexing. They pop up where they’re not needed, and their absence can cause confusion and misreading. One source of uncertainty about commas is their use around names. Sometimes they are required and sometimes not, but once you understand the principles at play, you will find it easier to determine when to include them.

Commas are used around names in two main ways. The first is a comma of address, and it appears when a name or a noun or phrase that stands in for a name is used in a sentence. Here are a few examples.

It’s a pleasure to see you, Emily.
Dear lady, can you help me?
It is clear, Irene, that our adventures are just beginning.

As the first two examples show, only one comma is needed when the name or phrase appears at the start or end of the sentence. If it occurs elsewhere, however, it is separated from the rest of the sentence by a pair of commas.

While the comma of address might seem like a petty point of punctuation, it can be necessary to establish clarity. Compare the following two statements.

In the first instance, the comma before ‘Dorothy’ shows that she is the person being addressed. I am telling Dorothy that I don’t know something. In the second case, where no comma appears, Dorothy is the object of the sentence. She is the thing I don’t know. The presence or absence of the comma of address alters the meaning of the sentence. That is why it is vital to understand when and how to use it. Fortunately, it is easy to learn this.

If the information is essential, no commas are necessary.
If it is extra, it needs commas.

Think of it like this: essential information must be part of the sentence in order for the meaning to be conveyed. Extra information can be removed from the sentence, and the meaning would remain the same. The bit that is extra, but not essential, gets framed by commas.

Let’s see how this rule relates to names.

Author Bella Li won the prize for poetry with her book Argosy.
A published poet, Bella Li, will be in attendance.
My sister Leanne loves lemurs.
My brother, Bertie, bites bananas.

The name ‘Bella Li’ is essential information in the first example. Without it, the sentence reads as ‘Author won the prize for poetry’. Not very meaningful. In the second sentence, the subject is ‘A published poet’, and the name of the poet is an extra detail. As such, it is enclosed by commas. If the name were removed, the sentence would still make sense: ‘A published poet will be in attendance.’

In the final two examples, the use of commas may seem inconsistent. Why should Bertie get them around his name when Leanne does not for hers? The answer, as before, is that ‘Leanne’ is essential information and ‘Bertie’ is extra.

The absence of commas from the phrase ‘my sister Leanne’ means that I have more than one sister, so it is essential that I use her name in the sentence to identify which of my sisters loves lemurs. In contrast, the commas around ‘Bertie’ indicate that the information being given is the same as in the noun phrase ‘My brother’ that is appositive to it. By saying ‘My brother’ and ‘Bertie’, I am repeating the same thing, and I am also signalling that I have only one brother.

Just in case this is all sounding too straightforward, let me point out that distinguishing the essential from the extra is not always simple. Returning to the first of our examples above, we may ponder whether a comma is required before the title ‘Argosy’. On the one hand, the sentence ‘Author Bella Li won the prize for poetry with her book’ is arguably meaningful. The title could be considered as extra information, thus requiring a comma to be added before it. But don’t we need to know what book won? Wouldn’t that make the title essential information?

Furthermore, using the same logic as we applied in the last two examples, the omission of the comma suggests that Argosy is not Bella Li’s only book. (It’s not, as it happens.) If it were, the terms ‘book’ and ‘Argosy’ would mean the same thing, and a comma would be required to separate them.

So is the comma before the title necessary or not?

I leave that for you to decide, my friends, with a gentle reminder that although punctuation is often prescriptive and sometimes perplexing, it is also more subjective than you might think.

Do you get confused about when to use commas around names? Has this article helped to clarify your understanding? Would you put the comma before ‘Argosy’ or not?