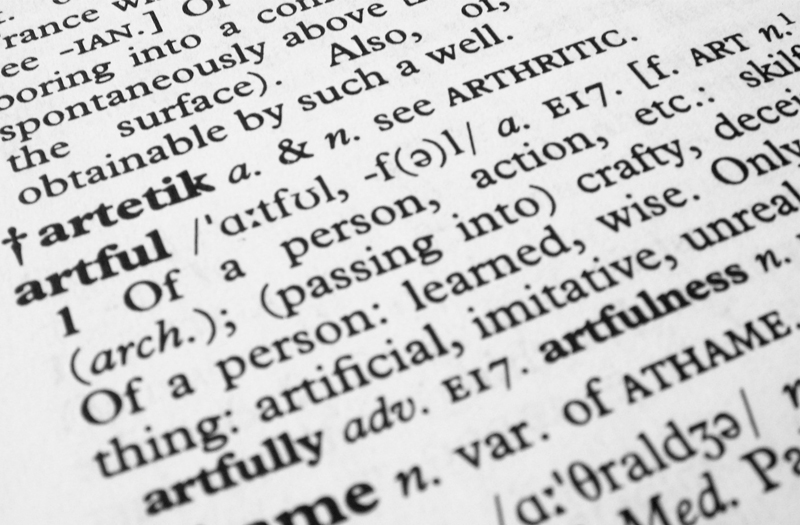 You don’t actually need to be languishing on a balcony in order to ponder what’s in a name. Yet as Juliet discovered, it can be surprisingly enlightening to consider how and why a certain thing is named as it is.

If you are an artist, the title of your work adds to the impression a viewer has of it. For authors, the name of a book is often the first thing potential readers encounter. Equally, for students, academics or writers of any kind, a document’s title may be smartly deployed to inform, intrigue or otherwise entice an audience.

Of course finding the right name for something can be difficult. But curiously, the decision to call my business Artful Words came easily to me.

The word ‘artful’, evidently enough, evokes the richness of art. That which is artful contains, carries or embodies art in the same way that something which is beautiful embodies, carries or contains beauty. Yet ‘artful’ also implies the enactment of a practiced skill. There is a sense that devotion and care are required in order to create something artful.

This need not suggest an overly ponderous practice, however. For me at least, there is an air of abundance, almost joyfulness, nestling within the word ‘artful’. It speaks not only of the delight derived from the finely formed outcome of considered effort, but also of the satisfaction to be found in the act of making itself.

In naming my business Artful Words, I hoped to express all of this.

I wanted to infer both creativity and refinement, dedication and flair. A quick glimpse at a dictionary, however, may convey a somewhat different meaning.

The Macquarie Dictionary, for instance, includes both “ingenious” and “tricky” in its definitions of the word ‘artful’. The Macmillan offers “skillful at achieving an effect or getting something from people”, which doesn’t sound too bad. Until it adds “especially in a dishonest way”. Likewise, the New Shorter Oxford English Dictionary begins its definition with “skillful, clever” before continuing on to “crafty, deceitful”, while the Webster Universal is just boots-and-all blunt. “Deceitful,” it says. “Cunning, crafty.”

Is this really the impression I want my business name to give?

But then I have to wonder. Are those who use their words artfully really being deceitful? Is cunning indisputably a bad thing? Perhaps, as the Macquarie suggests, people who are artful in their expression are “skillful in adapting means to ends”. They mean that in a good way, though. Don’t they?

As I see it, being artful with your words does demand a level of cleverness. But it’s not about being devious or sneaky. Rather, it means understanding the intricate effects that language can have and utilising these effects wisely to express a clear and effective message.

Dictionaries may label this as deceitful, but I believe that in our writing and in our speech, in what we name and what we proclaim, it is worthwhile using and improving whatever skill, ability, dexterity, ingenuity, inventiveness, art or craft we possess.

Aside from which, artful words really are more fun.

What does being artful mean to you? What do you consider when naming your work?