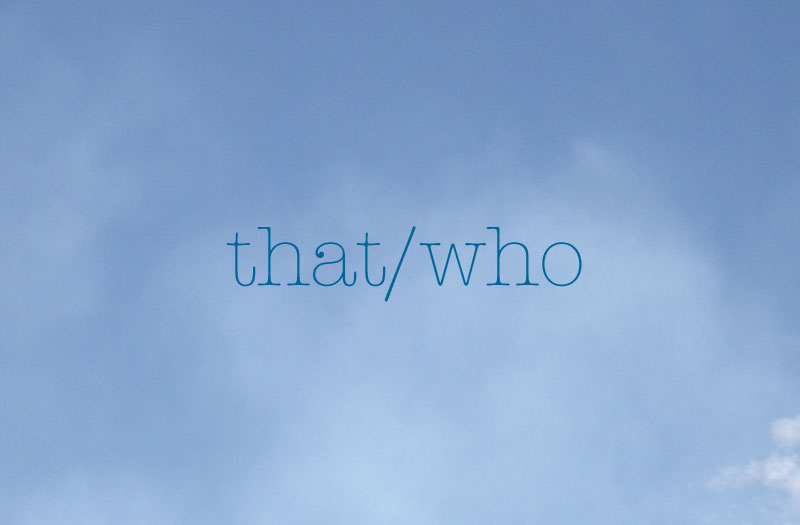 It may be a shiny new year but you’ll be pleased (won’t you?) to know my instinct to pick at grammatical inaccuracies, linguistic inconsistencies and inelegant expression is as keen and ready as ever.

Here’s one example I recently swooped upon:

“Website content will need to be written by influential authors that display
high authority in their fields based on social signals and high quality writing.”

Despite eliciting a mild wince through its repetition of the word “high”, this sentence is not technically incorrect. Even so, if I were to encounter it in a document I was editing, I would make one small but meaningful alteration.

Both “that” and “who” serve a number of functions, depending on the context and sentence in which they appear. In this case, “that” is used as a relative pronoun. As with all pronouns, it stands in place of a noun.

The noun or noun phrase to which a relative pronoun refers is called an antecedent. Here, the antecedent for “that” is “influential authors”. And this is the bit that niggles.

The influential authors under discussion are, presumably, people. Therefore, the relative pronoun that to my mind more precisely – if not more correctly – refers to them is “who”. While “that” is equally accurate, it is also less particular. It could just as readily indicate objects, places or concepts. This is not the case with “who” and that’s why I would use it.

Introducing a relative clause with “who” rather than “that” acknowledges the agency – and indeed, the personality – of the actor in the sentence. It adds a tiny touch of humanity that I believe lends greater integrity to the phrase and the idea being expressed.

Your inclination may be to use “that”, and this is perfectly acceptable. I merely invite you to consider the subtle implication it carries.

Never forget that words are powerful. As a writer, you can choose how considerately you use them. Even a simple decision between “who” and “that” can make a difference.

Do you prefer “that” or “who” as the relative pronoun when the antecedent is a person or other living being? In what other ways can the words we choose demonstrate respect or its lack?