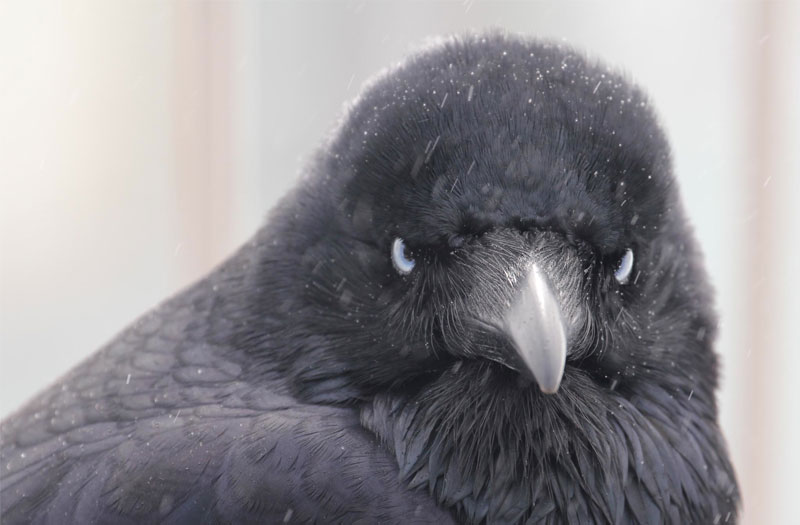 It began with ravens. A flurry of birds, persons and other wondrous beasties hurried thereafter. But it did begin with ravens. I read an interesting article about these sleek creatures and it led me to wonder. I was familiar with the expression “a murder of crows”, but what was the collective noun for ravens?

Turns out, it is also a murder of ravens, as well as an “unkindness” which equally applies to crows. But it was a third collective noun for ravens that really caught my attention. This was a “storytelling”. And at that point, my mind lifted its wings, flapped them a few times and went soaring off into the skies.

A storytelling of ravens. Isn’t that fabulous?

It’s almost a small story in itself. In just four words, a surprising world is glimpsed. You can picture the birds, gathered blackly on the grass, cawing their ravenish tales. What stories do you imagine they’d tell?

Off now on a jaunt, I started seeking out other collective nouns that offered equally intriguing impressions. And believe me, there are many!

Bears come in sleuths or sloths – perhaps depending on the season and how sleepy they’re feeling. It’s a passel of possums and a kettle of hawks, a pod of pelicans and a knot of frogs.     An aurora of polar bears is nice, not least because it’s fun to say. I quite like a charm of hummingbirds, but it worries me that it’s also a “troubling” of them. Surely a “tremoring” or a “shimmering” would be more apt?

Even hermits get their own collective noun, as paradoxical as that sounds. Should you ever happen upon a gathering of them, please note that it’s an observance of hermits.

Some among these nifty nouns are considered to be official, in that they were written down centuries ago. Many of them show a distinct linguistic delight in their contrivance, just as those devised today do. It really is a fascination of boars, though I’m not so sure about a platter of platypuses. As for a committee of vultures… Well, I’m sure we can all understand that one.

Entertaining as these explorations are in themselves, the realm of collective nouns in fact contains some valuable insights for aspiring writers.

First, there’s the pleasure of encountering such rarely heard words as “gam” (of whales), “skirl” (of pipers) and “clew” (of worms). Sure, you may not find a use for these neglected treasures in everyday conversation, but isn’t your vocabulary improved by their inclusion?

Next, there’s the rhetorical contrivance of collective nouns, many of which play around with alliteration, assonance and onomatopoeia. Not for nothing is it an armoury of aardvarks, a litter of kittens and a crash of rhinoceroses. The play of sounds in collective nouns is part of what makes them engaging and memorable. The same can be true of your writing too.

Then there’s the condensed richness of the image. The juxtaposition of the collective noun with the object it describes can be poetic, provocative, or purely incongruous. (Why, I can’t help wondering, is it a “troop” of mushrooms? And how on earth can it be a “walk” of snails?) In any case, an effective collective noun is an evocative gem.

Tighter than a haiku, it compels precision. It’s an exercise in finding that one right word which most potently and appropriately expresses some essential quality of the collection in question. And isn’t divining such perfectly pertinent words what the best writers successfully do?

This leads us to the greatest gift that collective nouns bestow, which is the ingenious joy in inventing your own. This particular party trick invites you to employ all your wit and skill with language to find that artfully astute term which captures an essence and conveys a whole story.

Messing around with collective nouns may seem like nothing more than an agreeable indulgence. But actually, it shows language at use in a deliberate and considered way. As such, it can be quite instructive, as well as being both amusing and diverting.

Oh, and just in case you were wondering. The collective noun for writers? That would be a “worship”. Of course.

What’s your favourite collective noun? It can be official, idiosyncratic or entirely imaginary. Or, what throng of things do you believe is in need of an inventive collective noun? Share your cleverness below.

Photo credit: That murderous looking raven (no doubt with a story or two to tell) was snapped by neeravbhatt and is used here via photopin under a Creative Commons licence.