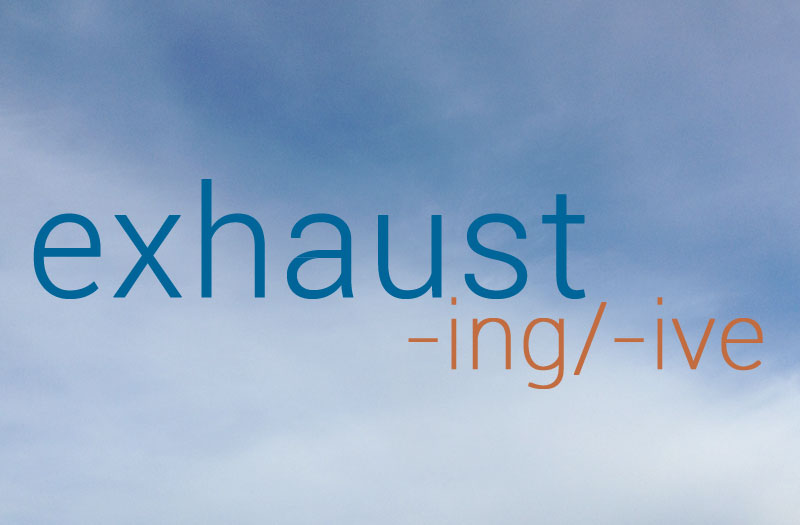 It is an easy mistake to make, especially when you’re tired. Nevertheless, there is a difference in meaning between the words “exhausting” and “exhaustive”, and astute writers know which one to choose.

The word “exhausting” may be used either as a verb (as in exhausting all possibilities) or as an adjective (an exhausting day). In either case, its meaning is to use or consume, to drain of strength or resources, or to draw out all that is essential or interesting. Often, it denotes tiredness or fatigue.

While it is true that the word “exhaustive” may also refer to the draining of strength, energy or resources, its more typical meaning is thorough, complete or comprehensive. An exhaustive examination of something, for instance, would be extensive and meticulous, leaving nothing out.

Clever writers might like to play around with these simultaneous meanings. For the sake of simplicity, however, I suggest that it is best to select the one word of these two that most accurately reflects your intended meaning. Is it more important, for instance, to imply a certain tiredness or to evoke a level of diligence?

As always, it is wise to keep your reader in mind. Rather than impressing your audience with your stylistic decision to use one of these words in place of the other, you could risk causing confusion. Worse still, you might end up looking like you don’t know the difference between them. If conveying both meanings matters to you, try finding a way to do it more precisely.

This brief explanation of these similar but distinct terms is itself not exhaustive. Yet hopefully it is not exhausting either. It is merely intended to assist you in choosing the best word for your purpose and to help you become a more artful writer.

Is the difference between “exhausting” and “exhaustive” clear to you? Which other words that seem or sound alike do you often get confused?