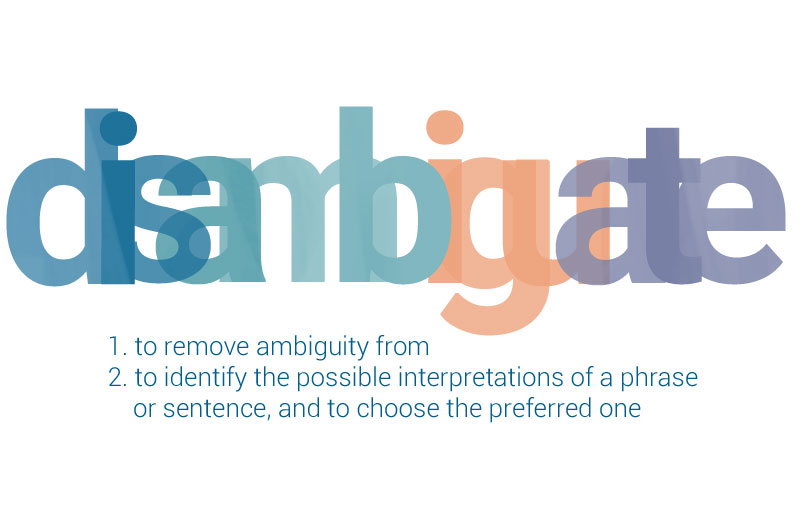 This is the first in an occasional series of posts focusing on disambiguation, which is an essential element in effective writing and copyediting. And before we go any further, let me assure you that “disambiguate” is a real word with a proper definition and everything. The one above comes from our friend the Macquarie Dictionary.

Disambiguation alludes to the editor’s art of untangling the multiple possible meanings in a sentence and proposing alternative versions that express the writer’s intention simply and unequivocally.

A recent ambiguous sentence I encountered asserted that:

“The media should tell the public they got it wrong.”

Or perhaps: “When the media gets it wrong, they should inform the public.”

Or even: “The media should tell the public when incorrect information has been given.”

If in contrast it is the public who has got it wrong, the revised sentence could be: “The media should inform the public when the public gets it wrong.”

Or alternatively: “When the public gets it wrong, they should be informed by the media.”

However, this latter version contains its own ambiguity. Does it mean the public should be told (informed) by the media that the public is wrong? Or rather that the media should be the instrument for enlightening for the public by providing them with information (informing them) rather than simply admonishing them?

I’ll leave you to choose which of the above options you think best expresses the intended meaning of the original sentence.

Meanwhile, I’ll keep trying to decide whether I’m a pessimist or a realist for using “when” instead of “if” in relation to the media (not to mention the public) getting it wrong.

Perhaps I’m secretly optimistic for believing that the media would ever tell the public of their error?

Sentences with multiple meanings can be confusing but also amusing. (Have you heard the one about the dog that was too hairy to eat?) Which ambiguous sentences or phrases have you found? Share them in the comments below.